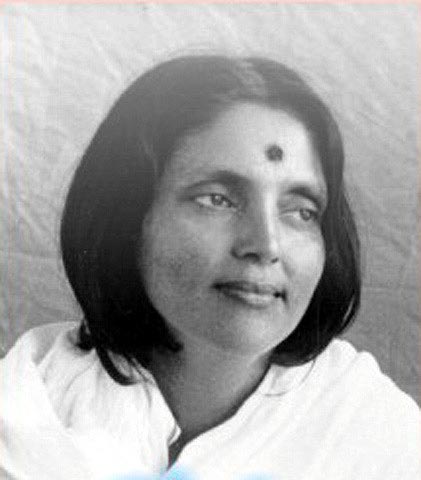 Sometimes it happens that we lose our temper. Because we are tired, or people have been aggressive, or even because someone has shown too much devotion toward us.

What is devotion? When people love us and want to take care of us, it is devotional love. In a perfect couple, devotional love goes both ways. But devotional love is not so easy to accept, would you be as patient as Sri Ma Anandamayi who let Her devotees ornate Her with garlands, make Her drink and eat and perform all sorts of services to Her?

No! Leave me alone! I can do this all by myself! I don't want your devotional love! So we want love but we are not ready to accept devotion. We would rather have lovers on demand who come show their affection when we snap our fingers at them then leave when we are tired of seeing them.

For these people who were serving Sri Ma, it was a blessing that they could do so. They had so much love and devotion for Her! But what do you think would happen if someone would then come and start badmouthing Her? How would Her devotees react? What would She do? In fact, we know because it has happened.

In the following video, the situation is explained. A sannayasi came with disciples and they started talking rubbish about Ma. But first, we can ponder what the I Ching has to say about it. In fact, when someone is aggressive there are two reactions illustrated in the I Ching:

The third line, undivided, shows its subject in a position like that of the declining sun. Instead of playing on his instrument of earthenware, and singing to it, he utters the groans of an old man of eighty. There will be evil.

One responds when one is called.

One responds when one is called.

On répond quand on nous appelle.

This answer is about retaliation. If someone starts doing wrong to you, then you're free to retaliate. It is a self-defensive move. This situation is shown for example in Sailor and Lula's opening scene (much too violent to be linked here). But sometimes evil people don't want to start the fight, they seem to only want to make you lose your patience. So, the answer is to be more patient than they are, as explained by the hexagram 38.1:

The first line, undivided, shows that (to its subject) occasion for repentance will disappear. He has lost his horses, but let him not seek for them ;--they will return of themselves. Should he meet with bad men, he will not err (in communicating with them).

Friends who have left will come back and derogatory people will calm down if one stays quiet.

Friends who have left will come back and derogatory people will calm down if one stays quiet.

However this situation needs to be deconstructed, in that these people are not necessarily evil, despite their bad behavior. This hexagram is about a misunderstanding, so these appear to be evil, when they are not. They follow the wrong path but their intent is not always evil. Some are evil, but others can be benevolent people, for example when you knock at the wrong door, your intent was not evil. So, let watch this video now:

The devotees went the 30.3 way and Sri Ma went the 38.1 way. Br Geetadi says that if we abuse someone and they don't react then we leave. It's a dangerous path, because ignoring people is a passive-aggressive stance. The abusers can't possibly leave without gaining some form of recognition: they need to be acknowledged. Sympathy is not required but acknowledgement is mandatory: "I know that you exists". When recognition is not given, only the good ones will leave, the evil ones will certainly stay and create more troubles. In this situation, the badmouthing disciples have been acknowledged by Ma's devotees who caught the disciples by the throat and also by Sri Ma who said: "No, all are His forms and He comes in all forms.". The difficulty is to decide between 30.3 and 38.1, the answer to this is "Do you feel threatened?". While Ma's devotees felt threatened, She did not. In fact, She has calmed down both the sannyasi's disciples and Her devotees in the same move.

Now we can have a look at the classical comments, and see if they can bring us more understanding about this situation. About 38.1, Taoscopy's comments are quite similar to the classical ones:

Remorse disappears.
If you lose your horse, do not run after it;
It will come back of its own accord.
When you see evil people,
Guard yourself against mistakes.

One the other hand, it is well to be cautious when evil men who do not belong with us force themselves upon us, again as the result of a misunderstanding. Here the important thing is to avoid mistakes. We must not try to shake off these evil men by force; this would give rise to real hostility. We must simply endure them. They will eventually withdraw of their own accord.

This is exactly what happened in this situation, except that Wilhelm does not comment about acknowledgement which I think is a key point, Confucius himself valued recognition very much.

Sri Sri Ma Anandamayi has spoken in very similar terms when she was diseased:

If we mentioned recovery to Ma she would reply, "When you all come to me, I don't drive you away. Diseases also come and play within this body. Why should I drive them away? They will play as long as they have to and then leave of their own accord." Saying this she would laugh. The diseases began sporting with great aplomb within Ma's body. A few days later, the symptoms of diseases receded and the fever also came down but did not stop altogether.

Of their own accord. Naturally, most of us are unable to adopt this attitude, and it should not be enforced on anyone. If we really understand what 38.1 is about, then we should not reject vaccination either.

About 30.3, the classical comments appear to be entirely different:

In the light of the setting sun,
Men either beat the pot and sing
Or loudly bewail the approach of old age.
Misfortune.>

But it's the same idea indeed: we feel threatened. Wilhelm in his comments conclude:

To the superior man it makes no difference whether death comes early or late. He cultivates himself, awaits his allotted time, and in this way secures his fate.

This is a wise advice. Wilhelm also explains that in this situation we either become uninhibited (like in Sailor and Lula's scene) or we yield to melancholy. So, it must be that the answer to a threat is neither in violence or depression, but it dwells in resilience.

Finally, an interesting aspect of 38.1 is that the recommended attitude toward friends and foes is the same:

Friends who leave after a misunderstanding cannot be won back. It is their decision only to return when we show enough patience.

Foes who come after a misunderstanding cannot be expelled. It is their decision to leave when we show enough patience.

What kind of misunderstanding can make us lose friends? Is it when we reject their devotional love, or maybe is it when we give them too much love? These are two facets of the same situation, but the runaway friend is oftentimes the one who cannot stand so much devotion.

What kind of misunderstanding can make foes come to us? When we show them something that they like.

When the world knows beauty as beauty, ugliness arises

When it knows good as good, evil arises

Accepting devotion so as to keep Her devotees close, refraining from attracting evil people, waiting patiently for friends to return and foes to leave, Sri Ma mastered all of this perfectly.